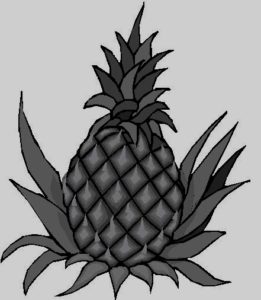 American colonists began importing the pineapple from the Caribbean in the 17th century. Due to its seemingly exotic qualities and rareness, the pineapple soon became a symbol of hospitality in early America. Because trade routes between America and Caribbean islands were often slow and perilous, it was considered a significant achievement for a host to procure a ripe pineapple for guests. Similarly, some accounts tell of New England sea captains who, upon returning from trade routes in the Caribbean or Pacific, would place a pineapple outside their homes as a symbol of a safe return.
Due to its association with warmth and friendliness, pineapples in America were often used as the "crowning" piece in large displays of food. Similarly, the pineapple symbol was used frequently in the 18th and 19th centuries to decorate bed posts, tablecloths, napkins - anything associated with welcoming guests. Today, the pineapple remains a fitting symbol for the hospitality industry, and pineapple-themed products still abound.  From lamps to candle holders to salt and pepper shakers and beyond, the pineapple motif says "Welcome!"
2018-11-20